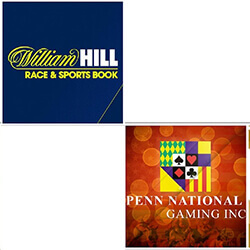 One of the world’s biggest online sports betting operators, William Hill, has announced its intentions to acquire Penn National Gaming, which would give the operator a significant foothold in the United States. The operator has already made some headway into the country prior to the legalisation of sports betting within the US, where it had operations running in Nevada, New Jersey, and Delaware, and including a race book in Iowa.

Hill has also been in business with IGT, offering services for the Rhode Island Sports Betting RFP. William Hill chief executive Philip Bowcock revealed that the operator has recently signed sports betting deals with 11 casinos based around Mississippi, as well as one casino based in West Virginia.

Bowcock further revealed that talks are underway in attempt for the bookmaker to spread to 14 more states around the country, although it is not clear if these talks included Penn. It was reported, however, that negotiations are still in their early stages, and more may be revealed in the coming weeks.

If the deal with Penn should follow through, it would make William Hill one of the biggest international operators to begin offering services within the United States. One of their largest competitors, Ladbrokes, which owns GVC, as well as US Casino operator Boyd, announced a $200 million venture that they hope will allow them to dominate the US sports betting market.

As more bookmakers sign on, the US betting scene may become one of the most lucrative in the world.