Vegas In Mourning As 59 Left Dead 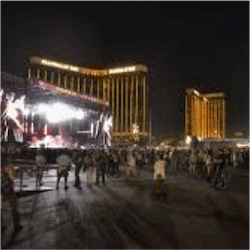 Late on Sunday night shock and horror filled the Vegas Strip when a crazed gunman sprayed automatic weapon fire at crowds gathered at the Route 91 Country Music Festival. The gunman shot from the 32nd floor of his Mandalay Bay hotel room and today the police are still trying to piece together a motive for this senseless crime. The Internet has been flooded with well wishes and prayers for the 59 people who lost their lives and those 527 people who were injured.

Across America there have been renewed calls for a change in gun control laws, while others place blame on Islamic terrorists. This is not completely unfounded as IS has claimed responsibility for the attack and claimed they had converted the shooter, Stephen Paddock, 64, months earlier.

So far however there has been no link established between Paddock and Islamic extremism and according to the FBI, despite claims to the contrary, there has been no evidence yet to indicate that jihadists influenced Paddock.

It appears this was a case of domestic terrorism as the Police found 23 fire arms in his hotel room after the incident, along with explosives. They also searched the shooter’s home which was located in a community of senior citizens in Mesquite, close to Las Vegas.

They found an additional 19 firearms as well as thousands of rounds of ammunition, electronic devices, more explosives and ammonium nitrate, used to make explosives, in the trunk of his car. The suspect also owns a second property, which police are currently investigating with the aid of a SWAT team to check for booby traps that could have been set up by the shooter.

Police have already determined that Paddock purchased his weapons from a local dealer, the New Frontier Armoury, who confirmed that Paddock had been a regular client, but he had all the necessary documents and licences to make purchases at the store. He did add that the shotguns and rifles the police found were all modified by Paddock himself to be more deadly.

The shooter’s brother was also interrogated but the authorities believe this was a lone attack planned by Paddock, so far for reasons known only to him.

While the investigation continues, politicians have jumped on the chance to push gun law reform. It remains unclear how Paddock managed to get all those firearms into the hotel unnoticed. This tragedy marks the deadliest shooting since the Orlando nightclub attack in 2016 where 49 people lost their lives.