Trump Casinos To Be Redeveloped 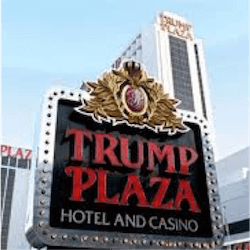 Two iconic casinos formerly owned by now US president Donald Trump are set to be laid to rest. Businessman Carl Icahn now owns both the Taj Mahal and the Trump Plaza Casino. Instead of cashing in on Trump now being possibly one of the most famous people in the world, Icahn has finally made plans to remove or alter these two structures and to finally lay to rest two o f the most iconic casinos in the US.

This week construction teams were seen dismantling the minarets that adorned the Taj Mahal. It has been an instantly recognisable casino in Atlantic City thanks to its heavily Indian inspired design features that made it stand out amongst the competition. The building has remained pretty much unchanged in the last 20 years and rightly so. Now the property has been purchased by the Hard Rock group, who have been doing particularly well for themselves in recent years. They recently started breaking ground on a billion dollar revamp of one of their venues in Florida.

During its heyday, Trump described the Taj Mahal as the eighth wonder of the world. Unfortunately the Hard Rock group feel it would be much better as a rock and roll themed venue, although at the moment their exact plans are not yet announced.

While the redevelopment does not appear to be on the scale of their Florida resort, the group will still be sinking $500 million into the site, upped from the original budget of $ 300 million. Perhaps it is the current political mood in the country turning against Trump but the Hard Rock group clearly stated that they will be completely dismantling the old venue. It seems the association of Donald Trump with the iconic building runs deep, but it certainly is a shame to see such a unique and beautiful building be torn down to make room for a franchise.

Trump Plaza To Be Demolished

Another Atlantic City icon, the Trump Plaza Casino is facing demolition. Under New Jersey law the building first needs to be tested for the use of Asbestos in the walls which will require special removal services if found.

So far details are sketchy on what will be replacing the venue. The casino has been struggling to meet its financial demands with the increase of competition in neighbouring states and of course the legalisation of online gaming, which has led less visitors to the venue. The divisive nature of president Trump’s politics certainly has not helped the image of the venue that was sold by Trump before he went into politics.