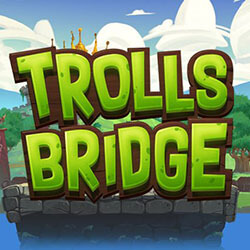 Yggdrasil has entered the Canadian market after a long period of exclusivity, and has brought one of their latest games to Canadian players in the form of Trolls Bridge, and online slot packed with a number of features. The slot is available on both Android and iOS, and can be played on desktop computers too.

After releasing the game for the first time, the developers have described it as a “ferociously fast and feature-packed game.” Along with this, they have stated that the game will be packed with a number of entertaining and playful characters that will accompany players as they make their way toward the big wins that the developers promise.

The slot draws inspiration from the Scandinavian folk tales of trolls that reside under bridges and ask that those that wish to cross the bridge pay a toll. Trolls Bridge has its reels set over a wooden drawbridge, and underneath the bridge a family of trolls can be found.

Players will be introduced to the free spins round, where layers will be given the option of five features by selection from a choice of 18 cards. The bonuses and modifiers are at random, and will be added to the player’s initial stake, and include additional wilds, extra free spins, and stacked symbols.

On Top of this, punters given the chance to pay another five coins per spin that can activate the Golden Bet mechanic, which instantly increases the player’s chance of winning.