The Stars Group Has a Majority Stake in CrownBet 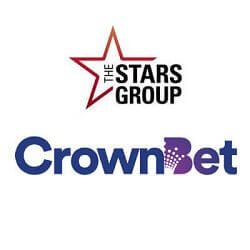 The Stars Group, a gaming and online gambling company based in Toronto, recently announced that it was the proud owner of a majority stake of 62% in CrownBet Holdings Pty Ltd, at the price of roughly US$120 million.

The Australian Financial Review reported that the Stars Group released a statement to the Toronto Stock Exchange that what is the 2nd biggest regulated sports betting market on the globe had increased its unaudited yearly revenues from roughly US$80 million in 2015, to around US$200 million in 2017. The Stars Group added that the unaudited earnings before interest, tax, depreciation, and amortisation, or EBITDA, was in the red for the first time last year, at approximately US$8 million.

Rafi Ashkenazi, Chief Executive Officer for The Stars Group, stated that CrownBet has become 1 of the quickest growing online sportsbooks in Australia, before adding that this was thanks to a strong management team, its mobile app, the proprietary technology it makes use of, its unique partnerships, and a loyalty programme that stood as a market leader.

The 62% interest in CrownBet that was acquired by The Stars Group from Crown Resorts Limited used cash on the Stars Group’s balance sheet, and the transaction was all cash. CrownBet and The Stars Group’s other shareholders, including a management team lead by Chief Executive Officer and Founder Matthew Tripp, apparently partnered up to get the purchase completed. The management team, based in Melbourne, along with Tripp, will reportedly remain in charge in terms of running CrownBet.