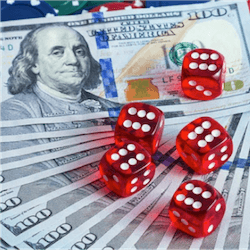 Gaming revenues have gone up across the globe despite many markets enforcing more strict regulation and software developers facing more and more competition from younger start-ups.

The recent Catalan independence conflict has done nothing to dampen the spirit of gamblers in Spain. The country’s gaming regulator, the DGOJ have announced their third quarter financials and the industry is looking as healthy as ever.

Financials for the industry jumped up this quarter by 37.7%. Slot games made up 50.9% of the total  €140.5 million that was generated. Sports betting, Bingo, Poker and Live Roulette all saw their individual revenues grow. This is fantastic news for the market, and of course the fans. As long as the industry keeps growing and developing, casino fans will be the ones rewarded.

In Macau the local regulators have seen similar jumps in revenue this year. October figures have shown a 22.1% jump from the same time last year. Analysts expected a 19% to 21% rise based on preliminary analytics but industry insiders were surprised when the $3.31 billion revenue sum was revealed. Government crack downs on illegal gambling and high rollers had a negative impact on the industry. That said VIP players have slowly been making a comeback to the region.

Revenues are also expected to have had a boost from the recent Communist Party Congress held in mainland China which would have generated more tourism and VIP players in Macau. The Golden Week national holiday also contributed strongly to an increase in tourism to Hong Kong and as a result increased casino traffic.

Online operator Paddy Power Betfair has also announced a 9% growth in their revenue for the third quarter. This jump in revenue was highlighted by an 11% growth in Sports Betting and a 35% jump in Australian revenue. The company also saw an 18% jump in US revenue.

CEO Breon Corcoran said that the figures have been very encouraging. The company had great figures in the third quarter even without a major football tournament. He also reiterated the fantastic figures in Australia and the US which are two very tough markets.

He went on to mention Paddy Power Betfair’s product platform integration project that will allow the company to easily and conveniently deliver a wide variety of products to many markets and customers. All in all these three markets have been lucky to have such impressive growth in the third quarter alone. It points to a healthy and growing global gaming market.