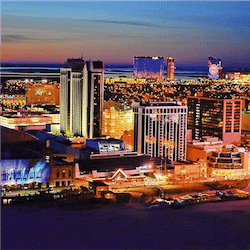 Atlantic City casinos have reported a substantial growth in business for this year. Numbers are up since last year, despite the closure of the Trump Taj Mahal. The state welcomes the revenue growth, citing a variety of factors that played a role in driving the revenue numbers up.

This resort town of 40 000 people has become one of the bastions of legalised gambling in America and one of the few states that sanctions and supports online gambling. The city has had a storied history and despite its reputation as a casino town, gambling venues have in fact been on a steady decline here. The city has seen numerous developments either never come to fruition or simply fade into bankruptcy shortly after starting.

The 7 remaining casinos, including the famous Borgata, have been reaping the rewards of this lack of competition. This year’s figures show that the local gaming scene is sustainable and profitable for the current gaming licensees.

Overall, casino and online gaming have grown in the district by an amazing 5.5% in August compared to the same period last year. Online gaming was only recently legalised here and it has already seen massive growth as more and more residents adopt this convenient way to gamble. This 5.5% increase translates to a whopping $12 million in cash.

David Rebuck, who is the State Division of Gaming Enforcement’s director, stated that these positive numbers are a clear indication that the local gaming market is stabilising after the 2008 financial crisis sent many businessmen into a downward spiral.

Rebuck also went on to mention that the main role-player in keeping the city’s gaming revenue from recession is the adoption of online gaming which has seen consistent and positive growth.

So far the total revenue generated this year from gambling tops $1.8 billion, a $300 million growth on last year’s figures. CEO and chairman of the Casino Control Commission said that as the region heads into the summer, a jump in revenue is to be expected.

He said that the period between Labour Day and Memorial Day is usually a very strong period for the casinos. He cites the great weather and the improving economy as the factors that have been driving the growth seen.

Looking at online gaming alone, the market grew by 32.4%, dwarfing the growth of the land-based casinos. Last year during this time of the year, online gaming revenue topped $16 million.
Merely a few months later, total online gaming revenue stands at $21 million. All in all, Atlantic City still seems in good shape with clear growth on the cards for this iconic piece of America.