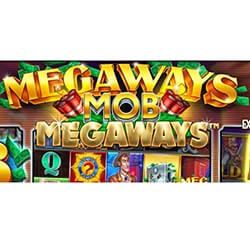 If the life and times of the 1960’s London East End mob is a theme that fascinates you, then be sure to check out an exciting new online slot going live very soon from upcoming new developer Storm Gaming.

Best of all is that Storm Gaming’s new Megaways Mob slot will feature the popular Megaways game mechanic, making of it an even more thrilling new experience on the reels.

The visuals and general design are typical cartoon-style, but that’s just about where “typical” stops for this grand new creation. On the reels players will partake in high-octane car chases, a completely random bonus game, police hot on the tails of mobs and other bad guys, and a huge selection of special in-game features and symbols.

Representing the substituting Wild is the Mafia Duo, which is able to land exclusively on the top reel only. All winning symbols are constantly being removed from the game area and instantly replaced by new (free) ones – this owing of course to the magic of the Cascading Wins feature built into the majority of Megaways slots.

The Mafia Duo will also at times be spotted staging a drive-by past the general game-area, throwing sticks of dynamite at the grid. The blast will either remove all lower-paying symbols from the reels, or will award to the player an unspecified number of Free Spins for the ultimate win. Also included in the Free Spins reward will be a random Multiplier.

12 free games will also be awarded to the player each time 4 or more Scatters are landed simultaneously on the reels, making for a real money-for-nothing mob crime spree.