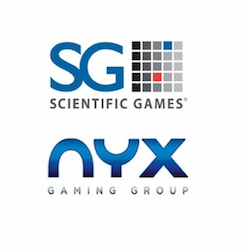 It was announced this week that a massive merger will be taking place between online gaming giants Scientific Games and NYX. NYX will be purchased by Scientific Games to create a global gaming powerhouse.

Scientific Games is currently based in Las Vegas and its diverse business interests and stakeholders makes it one of the most influential and powerful gaming companies. This merger saw Scientific Gaming pay CA$ 2.40 per share for a total purchase of NYX standing at CA$775 million.

The additionally resources gained from this merger will place Scientific Games in an enviable position, with a lot more stability and foundational strength for the company to expand its empire even more.

CEO of NYX, Matt Davey, stated that this acquisition will provide compelling and immediate cash value for shareholders while expanding the products and solutions the company can offer its fans and stakeholders.

Davey went on to praise the company’s now global scale, content and development capabilities that will certainly steer the company’s future directions. Kevin Sheehan, CEO and president for Scientific Games further went on to say that the two companies now have the broadest end to end portfolio that provides engaging content , new digital products and innovative design and technology which will play a pivotal role in the future growth of the two companies.

The companies have both been expanding their current product portfolios in order to spread their influence into online lotteries, casino gaming as well as sports betting. These growing markets are becoming more and more attractive to online operators who are looking for new business ventures.

Sheehan will remain as the head of Scientific Games once the merger deal is completed, while NYX executive Davey will be heading to a newly created Digital Gaming and Sports division in Scientific Games.

The History Of Scientific Games

Scientific Games has been around for 44 years. The company’s first claim to fame was producing the first secure and digital instant lottery ticket in 1974. They went on to build their success for Front of House lottery machines as well as Point of Sales terminals where members of the public could purchase secure lottery tickets that are untraceable.