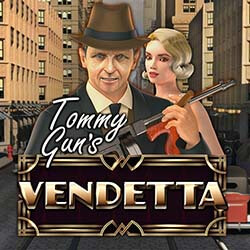 Red Rake Gaming’s upcoming new Tommy Gun’s Vendetta slot is a release online casino players won’t want to miss for anything. Action-packed, boosted by great graphics, and an overall champion entertainment package, the latest game from the award-winning studio is due to hit players’ screens later this month.

Bonus features have definitely not been skimped on either, with everything from Wild substituting symbols to a bonus mini-game included for maximum enjoyment and wins. A special progress bonus meter fills up for triggering the Tobacco, Liquor and Gold feature whenever the special Revolver symbol happens to be landed on the reels.

Once the feature has been triggered by the filled meter, the player gets to benefit from several Multipliers landing at random intervals all throughout the progression of the minigame. What’s more, all Revolver symbols will be instantly turned into either Tobacco, Liquor, or Gold high-value icons.

The bonus feature, named the Weapon feature, will allow the use of the Knuckle, Tommy gun, and Knife with which to play and make up winning combos.

There’s also a Free Spins feature that can be activated by landing winning combos that are added to the Bonus panel – and once triggered, even more and bigger wins can be had from high-value symbols.

The theme is probably one of the most impressive highlights of the entire game. The mob city theme is perfectly set, making for a time travel adventure to the previous century.

Symbols and designs complete the perfect player experience – with a Mobster, Briefcase, Mob Car, Money Safe, and Rose helping to create a super flight of the imagination.