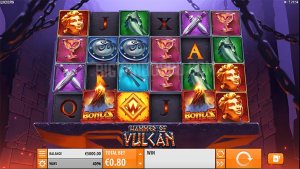 Let’s be frank about it: whenever Quickspin hints even remotely in the direction of a new game release coming our way, we’re instantly hyped. And the really good news is that this is no rumour or hint, because Quickspin is getting ready to launch a brand-new online slot this October. It’s called Hammer of Vulcan and it promises to set a new benchmark for Roman mythology-style online gaming entertainment.

The game is based on the legend of Vulcan, the ancient Roman god of fire, and from there also the game’s title. The scene is set in Sicily, and more specifically, at Mount Etna, the famous still-active volcano situated between the Italian cities of Messina and Catania. Thought to be anywhere between 350,000 and half-a-million years old, Europe’s largest active volcano has been the star attraction of many a film and book. And thanks to Quickspin, soon also of a game.

Played on a 6×4 set of reels and rows, Hammer of Vulcan features 4,096 ways to win, Hammer Wilds, a special Hammer Strikes feature, a Light the Forge Free Spins bonus game, and a Strike Again special bonus feature. There’s also a Feature Bet option that will allow players to part with 80x the regular bet as played in the base-game, in return for an immediate launch of the game’s free spins feature.

Those who prefer to wait for the free spins feature to trigger on its own, will have to land anywhere between 3 and 6 Volcano Scatter symbols on the game’s reels.