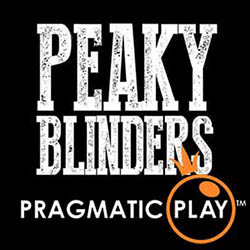 Since the popular television series follows the organised criminal exploits of a couple of quirky members of British mafia during the early 20th century, so too will Pragmatic Play’s exciting new branded slot – teased as being based on those very same antics and off-beat lawless escapades.

Featuring 20 fixed paylines and a 5×3 set of reels, Pragmatic’s upcoming new Peaky Blinders slot features a 96.05% RTP alongside a top jackpot payout of a sweltering 2,022x the initial bet wagered. This, coupled with special features, wilds, and free spins, are sure to make the studio’s latest new slot worth everyone’s while.

The slot’s wild symbol is represented by the Peaky Blinders special wild icon logo and will substitute for all standard non-bonus symbols when making wins fall. What’s more, whenever a wild symbol makes a winning combination to land on the reels, that win will be followed by a free respin. That’s a spin on the house!

The game will also feature a scatter symbol necessary to trigger any one of the two Peaky Blinders special bonus features, namely the Shelby Betting Shop Feature, and the Order of the Peaky Blinders Feature.

The first of the two features, namely the Shelby Betting Shop Feature, awards the player with 8 free games, whilst the second of the two, i.e. the Order of the Peaky Blinders Feature, awards a total of 10 free spins.