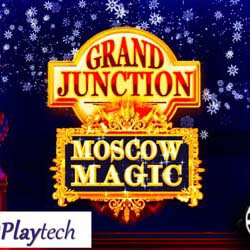 Over the years, we’ve come to know Playtech as a leading brand for innovative and creative online slots. But their latest upcoming release, Grand Junction: Moscow Magic, promises to outdo everything we’ve seen from them in recent times.

Due for release in April, their new title will whisk players away on a globe-trotting adventure as the action head to beautiful Moscow for he second release in the studio’s popular Grand Junction series of titles.

The action will go down on 5×3 reels and 50 fixed paylines.

With the Grand Jackpot set at 2,000x the bet, this is the biggest prize of all to play for. And to help players reach the Jackpot target, Playtech has included a premium selection of bonus features.

The Wild is a big deal as far as completing winning combos go. Depicted as the famous Towers from Moscow’s Red Square, the substituting symbol will transform itself into any regular symbol.

Two Scatters will be featured in Grand Junction: Moscow Magic: a Faberge Egg coloured in red and gold, and a beautiful Steam Train Scatter bonus symbol.

The main feature on display will be the Grand Junction bonus game. 5 or more Steam Train Scatters landed simultaneously will trigger the main bonus game.