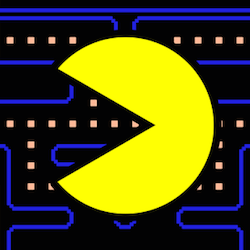 PAC-MAN is an icon of nineteen-eighties pop culture and is pretty much accepted as the universal face of video games.  Developed by Japanese game manufacturer Namco, PAC-MAN basically involves a single video screen that is populated by a maze filled with dots.  The goal of the game is a simple one: PAC-MAN is to gobble up as many as possible of the dots without getting caught by one of the roaming monsters.

A simple idea perhaps by today’s video game standards but in the setting of the 1980’s arcade game world it was all the rage.  Now, a real-money version of the cult classic is headed for casino floors, thanks to skill-based gaming developers Gamblit Gaming.

Gamblit Gaming announced recently that it had struck up a partnership deal with Japanese developer Bandai Namco Entertainment (ring any bells?) to release PAC-MAN Battle Casino, a real-money paid version of the old classic, developed specifically for casinos.  Market research has been indicating for quite some time that the only way to get millennials interested in gambling would be for the casino gaming world to move in the direction of skill-based slot games instead of games that have outcomes based exclusively on chance.

The Argument For Skill-Based Casino Games

Whether the skill-based gaming model will truly take off in the casino and online casino settings will have to be seen, but at this stage, all directional arrows are pointing that way.

This isn’t Bandai Namco Entertainment’s first voyage into the world of skill-based casino games.  July of this year saw the company seal a deal with one of Gamblit Gaming’s rivals, Gameco, to develop one of its flagship games, Soulcalibur II, into a paid casino game.

It hasn’t been a road paved with instant success for Gameco either, with the manufacturer’s skill-based machines having been withdrawn from three of Caesers Entertainment’s major casinos in the Atlantic City area after a trial-run of six months. However, Gameco retains a presence at some of the other major casino groups, as does Gamblit Gaming.

The Dawn Of Multiplayer Gambling

Think of it as a truly electronic version of a typical casino table game, with up to four players competing against each other for a cash prize.  The idea forms part of a concept that has been dubbed “next-generation casino games”, with many of the ideas, including PAC-MAN Battle Casino officially being unveiled at the Global Gaming Expo.