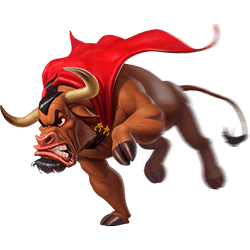 If taunting matadors and raging bull fights are your scene, then be sure not to miss out on a new online slot coming from ELK Studios this October. Wild Toro 2 is in fact a sequel and is sure to appeal to those players who enjoyed the initial release. Featuring fantastic graphics and oodles of super bonus features, Wild Toro 2 is so much more than just a follow-up release by the award-winning studio.

Played on an initial game area featuring 5×5 reels and with 259 ways to win, the reel set can potentially expand to a much larger 5×8 reels and 502 paylines. This means more wins from just as many spins from the expanded set of reels.

The top Jackpot prize has been set at a not-too-shabby 10,000x the basegame wager.

The Wilds are the game’s main feature symbols. These include Silver Matador and Toro Walking Wilds as well as a Walking Wild boosted by an increasing Multiplier, namely the Golden Matador Wild.

The Wild Matadors also happen to be game’s special bonus symbols and the keys to unlocking the Expanding Matador Respins feature.

Getting Matador Wild and Toro Wild to appear simultaneously from a single spin will instantly activate the Toro Goes Berserk bonus feature. The action is very much on the side of the Bull here, and if Toro wins his fight with the Golden Matador, the Multiplier function will be triggered as well.