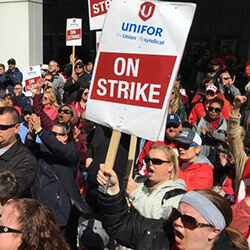 Casino workers throughout Canada have been striking over the past two weeks, and on-going talks with various casinos to address the issues are still underway.

Members of the local union shut down Chatham Street East, in front of Caesars Windsor, a casino based in Ontario. Although contract talks were organised, they broke down last week as the strikes intensified.

James Steward, the president for Unifor Local 444 spoke on behalf of the 500 people that filled the street. He told reporters that it was time for the casino to start negotiations once again.

National president of Unifor, Jerry Dias, was alongside strikers at the rally in Windsor. He has stated that he believes that casinos need to be more supportive of their staff, as these corporations make large sums of money.

“This is about establishing a framework of what is fair because we can’t have a situation where we have minimum wage workers and slightly above working in an industry that is making millions of dollars a year,” Dias stated. “For one whole industry, it just reeks of discrimination so we are pushing today.”

As of yet, it’s not clear when exactly talks between the casino and the workers are set to resume. Part of the rallies were sparked due to the leave that workers were getting as compared to what they should receive by law.