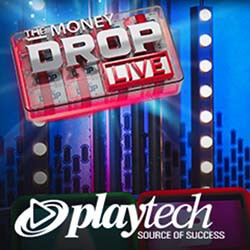 Leading gaming technology business Playtech has added another exciting gameshow to their already impressive gaming library, The Money Drop Live. This popular television show is already followed worldwide, and it is hoped that the game follows in the same success.

The Money Drop Live, The Million Pound Drop, and The £100k Drop are just some of the variations of the game available worldwide. With different versions existing in over 50 countries, the game is easily recognisable and should appeal to a wide range of online gamers.

To bring the game to life, Playtech has partnered with Banijay Brands who also happens to be the world’s largest content producer and distributor. Banijay operates across 22 territories with over 150 production subgroups. The release of The Money Drop Live comes hot on the heels of Deal or No Deal – The Big Draw that was released last year.

The game includes a dealer who spins a wheel. It also features multipliers of up to 5000x, however, boosters more than 8x will activate the Drop Zones game where players can decide how they would like to split their money in search of a big win. There are four drop zones, one of which is always safe and offers a guaranteed win. Should the wheel land on 8x it will activate a Quick Drop game which lets players put all their cash on one zone. A Card lash game is also available, offering even more chances to win using multiplier boosters.

The Money Drop Live is an exciting and thrilling game that follows the success of the real-life version that has been internationally recognised.