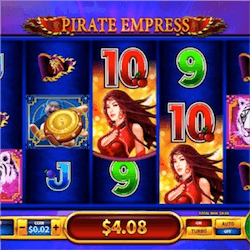 Pirate Empress is a new slot release from the Playtech affiliate Skywind Group. The success of their pirate themed Captain’s Treasure has led the developer to release Pirate Empress, an oriental themed pirate slot.

Don’t worry if you have had your fill of Chinese New year themed games, Pirate Empress looks like a smooth combination of both eastern and western design elements, leading this slot to have a unique look that should appeal to many.

The Pirate Empress, Madam Cheng, is the lead character in this title and she commands the reels like a true empress. She acts as the wild symbol as well as featuring in the free spins bonus game. Her partners in crime on the reels include a fearsome white tiger, one of your crew wielding a golden sword as well as a crew member holding a compass, amongst many others.

There have been some truly excellent high seas action themed slots so far this year with the likes of Wild Seas and Captain Squawk’s Booty Time thrilling many players, but Pirate Empress certainly holds its own against the competition. Using a 243 ways to win payline system and with full mobile compatibility, Pirate Empress delivers in spades.

When three of the pirate ship scatter symbols land on the reels you literally get to pick an adventure to have with the Pirate Empress Madam Cheng. You can choose one of 6 features to play with for your bonus feature.

There is also an extra special icon that can appear in the base game, Madam Cheng’s black pirate flag. These icons can appear stacked on the reels and their payouts can be up to 88 x your staked wager amount.

Pirate empress is a great 5×3 slot and the quality of this slots design makes it clear why Skywind Group get to work with the mighty Playtech.  If there are any complaints it’s that we would have loved to see Madam Cheng fire some cannons or blow something up as she makes a great action hero.