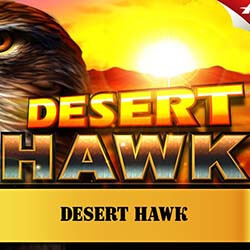 One of January’s online slots releases is a marvellous new title by the developers at Ainsworth. It’s called Desert Hawk and features several majestic creatures making their home on the plains of Northern Africa.

While the desert is typically the background for online slots inspired by Ancient Egypt, it’s nice to see a game with a different approach to the usual.

The game is played on 5×3 reels and 20 always-on paylines. Bonus features make a regular appearance and include the following: a top Jackpot of up to 250x the bet during the basegame (more during Free Spins), Wilds, Scatters, and a Free Spins bonus game.

The main bonus symbol to look out for is the Hawk Wild. This special symbol is more than just the signature icon, because it will also substitute for all non-bonus symbols to complete winning combinations.

There’s also a Scatter bonus symbol, which is depicted by an image of an Oasis. The Scatter is a unique bonus symbol indeed as it’s the key to unlocking both the Free Spins games.

The Desert Hawk Feature is the first of the two free games bonus rounds, with 8 free games the player’s reward. When activated, all Hawk Wilds landed on reels 2-4 will remain sticky for the duration of the feature. The feature can also be retriggered for 5 more free games awarded for every 3 or more Scatters landed simultaneously.

The second free games feature is the Desert Hawk Extra Feature. The award is again 8 free rounds, but with Wilds landing on the last four reels, and a Sticky Wild on reel number 5.

On the reels, players will discover Hyenas, Foxes, Scorpions, Raccoons, and Hawks.