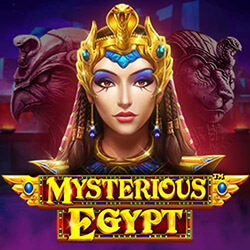 Due for release in January 2021 is an all-new Ancient Egypt-style slot by iGaming giant Pragmatic Play. Mysterious Egypt is a 5×3 reel slot with 10 fixed paylines and a theme that will excite lovers of Egyptian-themed games.

There’s no shortage of special features included either – with Mystery Expanding Symbols, a Free Spins game, and a top payout of a cool 5,602x the player’s basegame wager all part of the magical mix.

Exciting too is that, unlike so many other Ancient Egypt-style slots we’ve seen, the graphics have been modernised for Pragmatic Play’s upcoming Mysterious Egypt title release. This certainly puts an interesting spin on things as far as the overall experience is concerned. What the new title seems to get 100% right is to combine vivid colours and realistic-looking graphics with an ancient theme in such a way that nothing of the magic of the original idea has gone lost – and at the same time modifying the approach in such a way so as to appeal to a hip new generation of players as well as seasoned iGaming stalwarts in love with the classics.

But since the slot is clearly so much more than just another remake of a great theme, there’s much to be said for the bonus features and big-win potential.

The highlight special bonus feature is the Mystery Symbol feature, which randomly chooses a special Mystery Symbol for every spin. This symbol will expand on the reel in the event that its selection leads to winning combinations being formed.

The Wild and the bonus Scatter are both represented by a single common bonus symbol, namely the image of the mighty Egyptian Queen. Not only will she substitute for all regulator symbols as a Wild, but she will also trigger a Free Spins feature when landed 3 to 5 times simultaneously on the reels. 10 free games are awarded every time the feature is triggered.