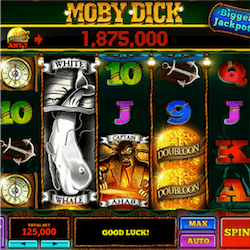 The Herman Melville novel of the same name inspires the Moby Dick slot. This story has inspired filmmakers, musicians and artists for hundreds of years. It has also inspired multiple online slot developers but nothing has been released as impressively epic and engagingly atmospheric as RabCat’s Moby Dick.

This slot has been developed for Microgaming and it forms part of their three major releases for October. The other two games they revealed along with Moby Dick are Monster Wheels and Halloween. Even though these slots are all great, Moby Dick stands out like a sore thumb among them simply because it looks and feels so different.

It makes use of great looking graphics that are well animated. The characters are all 3D but the artistic style is fully inspired by animated films. The novel’s lead protagonist, the obsessed and deranged Captain Ahab is also the main character in this slot. He stalks the side of the reels in his rickety rowboat, holding his whaling harpoon in one hand while surveying the horizon.

The legendary Moby Dick also makes an appearance as well, what would this slot be if you didn’t see the white whale? He will make his appearance when the game’s bonus feature is triggered , rising from below the water and destroying Captain Ahab’s rowboat in spectacular fashion.

This feature is not only active with the standard symbols, but with all symbols including Wilds and the bonus scatter symbols. You can form massive rewarding chains with this feature and it makes Moby Dick a very rewarding slot.

Included with the re-spins is the Free Spins bonus. You can expect between 10 and 15 spins to be awarded to you, but you can in fact get up to 40 spins if you land 4 or more scatter symbols. With the Win Freeze feature, this is actually a very achievable feat. Moby Dick looks like another popular slot for Microgaming. Its unique look and feel is sure to endear it to many slot fans.