Highlander Set To Rock the Reels 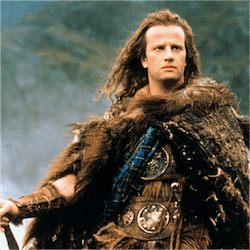 Microgaming revealed the surprising news that they will be releasing an online slot game based on the 1986 film Highlander. In this age of reboots of old film licences, it is quite an interesting choice for Microgaming to pick this cult classic film series.

Even though the franchise spawned many sequels, the first film was by far the most well received. It starred Christopher Lambert and the iconic Sean Connery who helped gain this film the cult following it enjoys today. The series carried on its popularity in the 90’s when a made-for-TV series was a hit with fans, especially thanks to the catchy intro theme written by Queen.

Quite why Microgaming chose to pick up this one now is not exactly clear. There has been no news in the film industry regarding a planned reboot, so perhaps the developers at Microgaming are simply fans.

Fans will have to wait until December 6th for the slot to go live but the information Microgaming have released so far makes the game look very tempting. It will feature a 243 ways to win system, rather than the more standard pay-to-play payline system.

The slot reels features the main characters form the film but unfortunately there is no Sean Connery. The bonus features include a Free Spins bonus game which also includes multipliers to increase your payouts.

There is an additional bonus called the Sword Skill bonus that adds multipliers to your standard wins, and finally there is the Battle Bonus game. So far there have been no concrete details on what this bonus round will feature but it seems to be a mini game where you must fight the movie’s main villain.

David Reynolds at Microgaming said that they wanted to capture the 80’s-inspired action and great soundtrack in this slot to directly tap into the cult fan base of the film series. He went on to say that the design team wanted to capture the look and feel of the awe-inspiring Scottish highlands with the grittiness of New York city, the film’s two contrasting locations.

Stephanie Kupperman, from Creative Licensing, who helped make the deal happen between Microgaming and Studio Canal, who own the film rights, said that fans will be in for a treat as the slot will feature the main characters from the film. Since the slot is still in development it may be too early to speculate in the game’s quality, but so far Microgaming has certainly captured the look of the film.