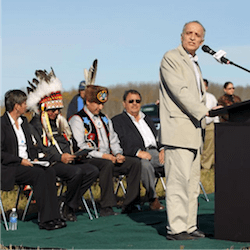 The province of Manitoba is facing an almost billion dollar lawsuit brought on by the AMC or Assembly of Manitoba Chiefs. This follows the announcement that the local government has approved the construction of a new casino called the Shark Club Gaming Centre. This casino would be in direct competition with the First Nation’s gaming rights in the province.

The AMC made their court filings and are in partnership with the AMC Secretariat Inc and the Sand Hills Casino Resort Ltd Partnership. They claim that the Manitoba Liquor and Lotteries board breached their contract with the AMC, a contract which ensured committed support for the development of First Nations gaming rights and markets. They also raised that the same board prevented the First Nations from opening a casino in Winnipeg, yet approved the Shark Club Gaming Centre.

The AMC also goes on to claim that the Manitoba Liquor and Lotteries Board is attempting to carve out and preserve their own share of the casino market, as they already own two casinos in Winnipeg and want to further consolidate their foothold in the region. They also said that the board is keeping the best real estate for their own interests while relegating First Nation casinos to outlying areas.

Further allegations include increasing the cost of equipment for First Nation casinos, denying loan extensions, refusing to meet with the AMC to discuss issues and problems and also refusing multiple requests to move their current casino sites to Winnipeg where there is a more lucrative market.

Government Commitments Have Not Been Met

Arlen Dumas, Grand Chief of the AMC has called out the government and demanded that they step up and resolve this issue. He stated that gaming is a part of Manitoba culture and as such it should be a meaningful way for the First Nation remembers in Manitoba to make economic gains.

He said that 20 years ago talks started to make the First Nation the leaders in gaming in the region as reparations for years of exploitation. They were promised the first 5 casinos in the region, along with viable markets to establish the casinos in.

This was further enshrined in a report in 1997 which was adopted by the Manitoba government in 2000, yet here they sit without the financial self sustainability they were promised.

Dumas went on to say that the government has committed themselves to this project time and time again, yet nothing has been resolved and now the First Nation communities, who these projects were supposed to lift up, are being unjustly punished for government greed.