Major Merger On Horizon For Stars 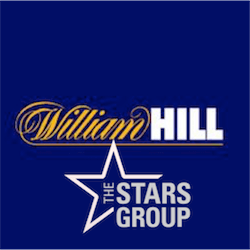 A Recent Financial Times article said that there are talks between The Stars Group, formerly known as Amaya, and British bookmaking giant, William Hill. Reports state that both of these companies are interested in a merger deal. The article hinted that the merger is currently under government review.

The article that affords this revelation also went on to say that there will be a string of mergers and acquisitions in the next few months due to the current global gaming market. It is a very competitive environment as many countries have started imposing even more strict regulations, going so far as to even outright ban online gaming such as the case with both Australia and America.

The combination of regulatory issues and growing competition has seen bigger companies buying up the completion. As technology advances and new platforms or devices emerge from tech hubs, gaming companies are also looking to snap up innovative new products, especially those that carry patents.

We have seen companies like Microgaming and Scientific Games snap up a lot of IP’s this year which speaks to the validity of the claims in the Financial Times article.

This would not mark the first time that The Stars Group and William Hill have spoken about a merger. Last year there were already talks under way for a $5 billion merger deal between the two. The merger ended up not happening due to the objection to it by Parvus Asset Management, one of the main investors in William Hill.

The firm stated that the deal would be based on hope and a lot of risk and debt. William Hill would have been stuck with a $3.5 billion bill in debt from The Stars Group. According to Pravus founders Mads Gensmann and Edoardo Mercadante this merger was the last thing the company needed.

What Has Changed This Year

Last year William Hill had to reduce its profit forecast for the year by 30 million so adding on additional debt will only be an unwanted burden. Pravus did admit that William Hill could use an iGaming partner but they did not feel Amaya was that partner. Amaya’s main focus is online Poker with their PokerStars brand, but Pravus felt that this is the least attractive online gaming market.

This year however the company has seen its profits increase steadily while the market continues to contract. It seems that Pravus have reconsidered their stance and the value that The Stars Group may bring to William Hill. The merger is still pending the completion of the government review of the plan, but it seems the companies have found some common ground this year that will make the merger go ahead.