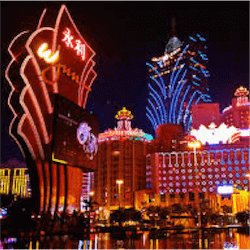 Asian gambling Mecca Macau has revealed that they dealt with a number of fraudulent or suspicious transactions during the first half of 2017. The Financial Intelligence Office covered the figures in a special report. A total of 1074 cases of suspicious transactions were reported. It is nearly double the number of reports from 2016 as there were only 780- cases reported last year.

Insiders suspect it is because of the relaxing of regulations by Mainland China. Technically there has not been an official announcement that laws have been loosened but after the government crackdown on Macau’s gambling industry in 2014 things went very quite in the city.

Now that high rollers are realising that enforcement of the strict gambling laws from Mainland China has again become lax again, they may be becoming more bold. While the recent Chinese government conference near Macau saw a massive VIP revenue boost for the region, there has actually been a continued upward trend in Macau’s gambling revenues for the last 16 months consecutively.

An Increase In Suspected Fraud

When it comes to suspicious financial transactions, this year of the 1074 flagged cases, 27.1% were linked to banks and insurance companies while a whopping 70.3% came from the gaming industry. It should be no surprise exactly why Mainland China wants to crack down on gambling in the city.

Of those figures, only 79 cases were reported to the FIO. By law any transactions over MOP 500 000 needs to be reported to the FIO but a lack of proper procedures and systems at many gambling operations mean players can exchange chips with no ID or junket promoters simply process cash under the radar.

From how government regulation and enforcement has taken place it seems the state is more interested in preventing gamblers from moving money off shore than they are particularly concerned about gambling per say.

All in all Macau is doing great. Gaming revenue topped $1 billion, with the city recording around $100 million a day in gaming transactions. Winnings paid out to gamblers also increased by 22.6%. November was already recorded as the 16th consecutive month of positive gambling growth and December is already set to top even that. This means that Macau will be collecting $34 billion in revenues this year and experts are saying the city’s revenue from gambling could hit $50 billion by 2020.