Legend of the Amulet Slot Released 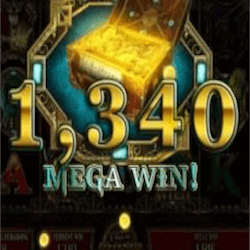 Uncover The Legend Of The Amulet

Taking its inspiration from the mythical Eye of Ra amulet, Legend of the Amulet is an adventurous slot game featuring two heroes who are attempting to explore the pyramids and find this mythical amulet. With its colourful graphics and original soundtrack, Eye of the Amulet manages to impress players with its animations and bonuses while keeping them engaged with its fun game play.

Featuring 40 paylines and an above average RTP of 96.51%, Legend of the Amulet can be very rewarding especially with its 50 000 coin jackpot prize. It makes use of a 5×4 grid for the reel icons and players can make a maximum wager of 200 per spin.

One of the unique game features is the randomly triggered Sand Storm feature. Desert winds will randomly blow across the reels and add special features, but the winds can get stronger and stronger and add better and better features as you play. The features can include extra on reel wilds, completely wild reels or you can get instant access to the free spins round.

Normally the free spins game is activated by 3 scatter icons. You can win between 5 and 10 free spins, depending on how many icons activate the feature. As the feature starts you get taken inside one of the Pyramids in the background of the standard game.

You also get to spin the special bonus wheel which will determine what multipliers and features get applied to the reels during your free spins. This bonus wheel feature ends when the wheel lands on the Start Free Spins option. The bonus wheel can mean that players can potentially have 100 total free spins in conjunction with retriggers.

The Scarab Beetle wild icon acts as the substitute symbol in Legend of the Amulet. Unlike wilds in other slots though, players won’t get any payouts for multiple wilds on the reels. The on reel symbols include the hero and heroine, a giant Sphinx and a beautifully decorated Ankh. The Heroine is the highest valued standard symbol and she can award up to 250 coins as a prize.

There are many Egyptian themed slots available online but Legend of the Amulet can hold its own thanks to the care that has gone into its design. iSoftBet has done an excellent job in adding great features and constant thrills to a well used theme.