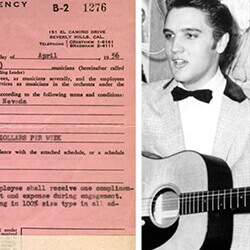 Elvis Presley’s first contract in Las Vegas has been put up for auction at the end of June, and the auction will be taking place in the UK.

The contract is for an engagement for the end of April and beginning of May 1956, and was set for two weeks in total. The commission was for Presley to play at the New Frontier Hotel and Casino, where he made a total weekly pay of $7500, as well as the commissions that were to be paid to his agents at the time.

The contract was signed when Elvis was just 21 years old on the 16th of April 1956. Henry Aldridge & Son is the auction house that will be taking bids on the contract. The piece of paper was inspected by the Elvis Presley Museum, and was certified as authentic. Some expect that the contract will be sold for between $33000 and $40000 during the auction.

Despite his growing popularity, critics at the time said that his performance was met with a lukewarm response due to the middle-aged audience he was playing for.