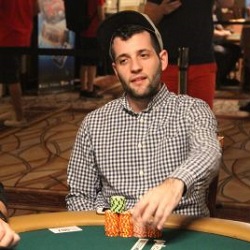 Ioannis Angelou-Konstas has made history in Brussels, winning his second WPTDeepStacks Title. The win took place at the Grand Casino Brussels Viage as he took down the Main Event for €1,200 -his second title from the series, which saw him getting a first-place prize of almost €75,000!

The Second Time It’s Ever Happened

Angelou-Konstas has become only the second person to win two WPTDeepStacks titles in the series’ history. Last year Rex Clinkscales doubled his first title in Tampa when he won a Main Event in Edmonton, which saw him becoming the first two-time WPTDeepStacks Main Event winner.

A Big Chip Lead for Angelou-Konstas

The professional poker player from Greece entered the last day of the action at the host venue with a massive chip lead over his last opponents. He managed to maintain his advantage all the way through the final table except for a couple of moments, few and far between, where the others managed to pull ahead slightly.

Milan Rabsz was one of these, as he scooped a significant pot after eliminating Michael Lech and took over the chip lead for a small while. Angelou-Konstas, however, quickly regained his momentum and emerged as the leader once more. At one point, Angelou-Konstas was in in possession of six of the nine million chips in play!

The Netherlands will be the next European stop for the WPTDeepStacks schedule. The capital of that country and its iconic Holland Casino will be hosting the series from April 13 to April 21.