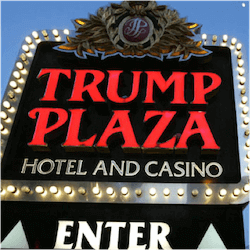 Billionaire businessman Carl Icahn, estimated to have a net worth of $16 billion, will be receiving a $5.6 million payment from the state of New Jersey to pay for the demolition of his failed Trump Plaza casino.

The businessman claimed the funds from the Casino Reinvestment Development Authority. This body is tasked with providing funds for redevelopment not just in Atlantic City, but all around New Jersey.

The funds for the CRDA comes from a 1.25% tax levied on casinos called the Investment Alternative Tax. The idea is that casinos would fund redevelopment cost for the city over and above the 8% of tax revenue the state already claims from casinos.

Recently however the state has redirected the funds to paying off Atlantic City’s spiralling debt. Icahn went to the city and claimed money to pay for the demolition of his Trump Plaza casino that he said should be covered by this redevelopment tax.

Demolishing The Boarded Up Eyesore Property

The Trump Plaza is located on beachfront property at the gateway to the city and is considered extremely valuable ground. The $5.6 million from the CRDA fund will cover half the total $13.2 million cost attached to demolishing the 39 story, 600 room plaza which also features a 750 seat theatre.

Icahn has previously also tried to collect funds from the CRDA. Icahn is also a majority owner of the Tropicana in Atlantic City which recently started upgrades if $35 million. The CRDA has already approved funds of $17.8 million to help pay for the upgrades.

Icahn was also the owner of Donald Trump’s Taj Mahal in Atlantic City. The venue was built by Trump in 1992 for $1.2 billion. It was sold between 2016 and 2017 for $50 million to Hard Rock after Icahn purchased it.

That said Icahn could have bigger problems to be worried about. Federal prosecutor in America have started investigating Icahn and his role as an unpaid advisor to Donald Trump as president. It is believed that Icahn influenced the president with regards to ethanol regulation, an industry Icahn has many investments in.

Icahn was a point of contention since his advisory appointment last year. Critics felt that there was a conflict of interest as Icahn also held investments in an oil refinery business called CVR Energy. However the EPA eventually chose not to implement measures and regulations advised by CVR Energy.