Greentube To Unveil Lord Of The Ocean Magic Slot 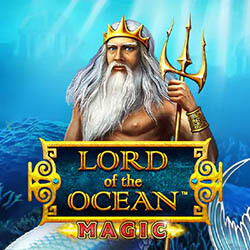 A sequel to the 2008-released Lord of the Ocean Greentube release, the award-winning developer’s up-and-coming new Lord of the Ocean Magic slot is bound to become every bit as popular as its smash-hit predecessor.

The basic grid setup consists of a set of reels 5×3 large and supported by a total of 10 fixed paylines. And though rated highly volatile, the game’s top-score potential of 5,000x the player’s initial bet certainly makes giving it a decent shot well worth it our books.

Bonus symbols include a Wild doubling up as the game’s Scatter bonus symbol – this being the key to unlocking the Lord of the Ocean Magic special Free Games feature. And all of which will be made all the more lucrative by the appearance of expanding symbols for the duration of the special feature.

As far as images and theme are concerned the Wild / Scatter symbol is represented by a portal-style Gate. Additional themed symbols are all true to the slot’s underwater maritime-style theme – including a Mermaid, royal underwater statues, Poseidon, and more. Even the lower-paying playing card symbols have been designed in such a way that they actually appear to be submerged in the ocean.

Allowable bets start at $0.10 for a single spin while increasing all the way up to a maximum of $20.