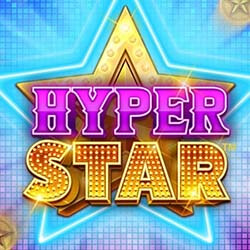 With so many players being fans of old-school casino slots, it’s good to see a new one coming soon from Microgaming and Gameburger Studios. Titled Hyper Star, the iGaming giant’s latest big release will cater to the needs and preferences of especially veteran players – but with something for modern-day players too because of a contemporary twist.

The layout follows a standard format, with 5×3 reels and 243 ways to win making up the game area.

Bonus symbols and features have been included aplenty, including Scatters, Wilds, Multipliers, Rolling Reels, and a Free Spins round. There’s also a top Jackpot of a crazy 7,250x the player’s wager to play for, and especially when playing at maximum bet, which has been set at $40, this could mean potentially banking life-changing sums of money.

The key focus is the Rolling Reels mechanic. Its inclusion means all losing symbols will be instantly removed whenever a winning combination has been formed – creating a free Respin for the player. And boosting wins by even more will be a special Multiplier that will increase in value with every consecutive winning combo formed.

The Wild is the Star symbol. Since it will only ever appear on three of the five reels, it won’t be acting as a five-of-a-kind sort of deal. This means it will only act as a substituting symbol for replacing regular icons.

But that’s not all that’s special about the Wild. There’s also a special meter for collecting Wilds as they fall, which may mean banking a Jackpot win of up to 5,000x the wager.

Microgaming’s Hyper Star is due for release later this month.