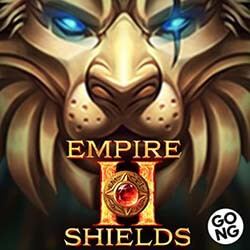 In the world of online casino gaming, visual appeal is as important as bonuses and big ways to win real cash. And this is something a new online slot by Gong Gaming has a great deal of.

Empire Shields will hit our devices later this month. Inspired by the age of medieval warriors, the game is all about luring the player into a land of adventure and heroism.

The latest Gong Gaming title will be played on 5×3 reels and will feature several top bonus features – including Regular Wilds, Modifiers, bonus Scatters, and a Free Spins game. The Modifiers are to be the stars of the show, with Expanding Wilds, Multipliers, Wilds, and Double Reels all due to do their bit for upping the in-game feature ante.

Lucky for players, at only $0.20 for a spin, everybody’s invited to play.

The Wild will help land wins by substituting for any regular symbol. Also, when forming new combos by itself with more than one Wild on a payline, it carries a reward of up to 15x the bet for that particular round.

The positions appearing at the top of the five reels will be occupied by so-called Toppers. These will charge and activate at random, and hold different rewards: