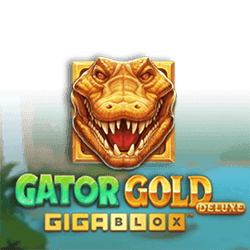 Yggdrasil, one of the world’s most prominent iGaming developers, has recently released a new and revamped version of their extremely popular Gator Gold Deluxe Gigablox. As one of the most played slot games in the world, the latest iteration brings all of the same magic from the original, including a series of improvements to offer even better gameplay to eager players.

The game takes place over four rows and six reels and includes 4096 different ways to win. It’s a high volatile slot with a total maximum stake of 60, and a player could potentially win to a maximum of 20,000 times the amount that they initially bet. Along with this, Gator Gold Deluxe Gigablox has a return to player percentage of 96%, and a number of thrilling features that make it stand out from the rest.

One of the most exciting mechanics to be added to this new release is an improved Free Spins, which allows players to upgrade their high symbols into Super High Payer, which is the Mighty Golden Gator. Combined with Gigablox, and this feature has the potential to see the player earn big rewards. At least five or more scatters will instantly tree free spins, where each symbol is able to offer between 1 and 3 free spins. The slot also boasts a unique bonus round, where players that collect three3 upgrade symbols will have the lowest value symbol completely removed. With enough upgrades, all high paying symbols can be converted to the Super High Pay Golden Gator.