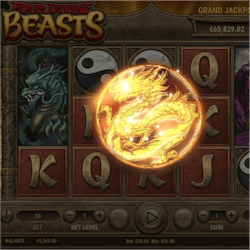 Get Lucky With Four Divine Beasts

Following the announcement that Habanero will be entering the Italian online casino market, fans have been looking forward to what new releases follow this news. It turns out Habanaero has been sitting on a winner all this time. Four Divine Beasts is their new slot and it is one of the developer’s best releases this year.

The impressive graphics used here is sure to blow away more than a few slot fans with its fine detail and clever use of colours. Habanero have outdone themselves with this slot’s looks but fortunately the game stand on more than the merits of its reel symbols and backgrounds.

Four Divine Beasts includes a massive in game jackpot prize, 243 ways to win and a series of varied bonus features that can vary depending on which of the game’s Four Divine Beasts act as the triggering symbol for the feature.

Randomly during the standard game, players can trigger special respin features determined by which of the Four Divine Beasts appear on the reels when the feature triggers. The beast symbols must land completely on the reels for this feature to activate.

The special respin feature that activates here is addressed in more detail in the Bonus Game section below. Each of the four beasts will lend its own flavor to the reels during these re-spins. Each re-spin starts with 2 spins.

This slot isn’t called Four Divine Beasts for nothing. There are four mythical creatures that appear on the reels and make your games more rewarding by adding bonus icons to the reels.

The Tortoise, Dragon, Phoenix or Tiger picture symbols determine what special features become active while you are playing. One of these symbols must land on the first reel while 3 of the Yin Yang scatter symbols must land anywhere else on the rest of the reels to activate this feature.