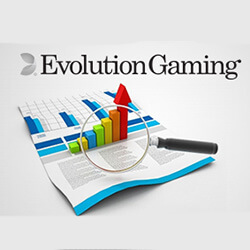 Martin Carlesun, the chief executive of Evolution Gaming – a live dealer software developer – has applauded the operator for another amazing year as they made history after revenue grew by 38% in 2018.

Total revenue collected for 12 months by the end of December last year increase to $276.6 million, which was primarily driven by increased commissions from existing and new costumers. The supplier benefited increasingly from growth in dedicated and live dealer table environments, with more customers customising their own offerings over the year.

The supplier’s current biggest market is the UK, which made up 17% of the group revenue for last year, and another 9% coming from Nordic regions. Most of the revenue came from non-UK and non-Nordic European markets, which accounted for a total of 52%, which was then followed by the rest of the world, including the United States and Canada, rounding out the other 22$ of revenue.

Regulated markets made up around 33% of the group’s revenue for last year, and mobile was the most popular service medium, account for 59% of 2018’s total. The increase in revenue was accompanied by increases in cost, which by 28% due to personnel expenses. By December 31st, Evolution had increased their staff count to 5837, up from 4014 in 2017. Costs have also been impacted by new live dealer tables and studios, and the supplier has also recently opened new facilities in the state of New Jersey, Europe, British Columbia, and Georgia over the last year.