The Emperor’s Tomb Slot by EvoPlay 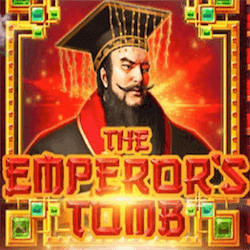 If you are looking for a solid slot experience with an ancient Chinese feel then Emperor’s Tomb is a prime candidate. Developed by EvoPlay, this slot ticks all the right boxes for a quality gaming session: Ample bonus features, rewarding reel symbols and of course fun and engaging game play.

EvoPlay have been making games since 2003 and this title shows off their experience in the industry. This is also not their first Asian themed title; EvoPlay has also previously seen great success with their other eastern themed slots like Journey to the West, Red Cliff and The Great Wall.

With its striking red and gold colours, Emperors Tomb certainly looks the part. It is based on the life of the first emperor of China and the huge terracotta army that he had built to be buried with him and to protect him in the afterlife.

The terracotta army make up the 2nd highest value symbols in the game, promising a maximum jackpot of 2000 coins while the Emperor’s Tomb itself is worth 4000 coins, the biggest standard jackpot in this slot.

For the real prizes though you will need to unlock the special bonus game. Here you will enter the Emperor’s Palace, exploring behind doors to find the treasure room. You can keep opening doors and collecting cash until you see the Collect sign appear.

Emperor’s Tomb also features the Emperor as the in game wild icon which can pay out between 10 and 4000 coins while still acting as a substitute symbol for all the standard reel symbols. These bonus features help to make this slot that much more rewarding and fun.

The game design itself features a 5×3 reel grid with 9 paylines arranged across them. This is less than you would see on other 5×3 slots but the payouts are generally higher than other multi payline slots. The Emperor’s Tomb is another great entry for the EvoPlay library. They are competing with some amazing talent out there but this slot is a perfect example of how they can hold their own.