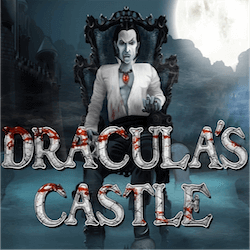 Dracula’s Castle Scares Up Some Wins

Following shortly on the heels of Playtech’s Vampire Princess, Wazdan has released Dracula’s Castle. While the graphics aren’t as nice as the Playtech slot, Wazdan’s effort is much more focused on the traditional vampire lore. Just like Vampire Princess however, this slot can do with a few more features.

Rather curiously Dracula’s Castle features the same reel layout as Vampire Princess. Players will find themselves on a 5×3 play area with 5 paylines across them. A 500 000 coin jackpot is on offer and the maximum wager allowed here is 100 per spin so quite a bit lower than on Vampire Princess. That said it is still a very large wager limit which should be more than high enough for most players. With desktop and mobile compatibility, Dracula’s Castle will certainly offer a strong rival to Playtech’s offering.

While the reel icons do feature some standard playing card symbols, there are also 6 picture symbols that look great. A bat, tombstone and a gothic castle make up the lower value icons while a blonde and red headed female vampire make up the higher value symbols. Finally there is Dracula himself.

He is a wild symbol but he can also expand across the reels when he is part of a winning combination. He can also offer a jackpot prize of 5000 for 5 matched symbols. Any less than 5 icons and he will purely function as a wild.

That is basically all the features of this slot game. There is a great looking gamble feature that features a mini game where you are picking one of two goblets of blood. You can activate the Gamble feature after any winning spin. You will then make the Gamble wager with your won amount

Picking the correct option between the two goblets allows you to double a won wager. Finally there is a special multiplier feature. If you can get the standard playing card symbols arranged in a row across the reels, you can add an up to 3x win multiplier to your wins on that spin.

Following Wazdan’s performance at the Sigma Gaming Expo slot fans have set their expectations very high for this developer and with Dracula’s Castle the company has not yet moved away from their usual simple format. With a few additional features Dracula’s Castle can be a great title so let’s hope that they release an updated version just as they did with Magic Hot 4 and Mystery Jack.