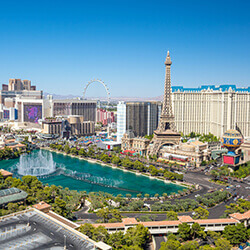 Spectrum Group Management, an investment group based in the United States, has announced their intention to sell a piece of land situated in the famous Las Vegas Strip. John Knott, the listing broker for CBRE Group told reporters that the 16-acre plot was the last piece of land in the city that could be developed in the future. The extremely high price tag is being justified but its location in the city, which is one of the busiest parts of the area.

This isn’t the first time that the piece of land has been on sale, as Spectrum had previously attempted to sell it in 2015 for an asking price of $500 million. They were unable to locate a buyer, and decided to remove the property from the market. Las Vegas was hit hard by the 2008 recession, which caused much of the development in the city to slow to a grind, and caused the sales of property to plummet. While this has slowly been changing over the last three years, the firm is yet to find a buyer once again.

Before the 2008 crisis, the property was intended to be used to build a multi-billion dollar Elvis-themed resort, which was subsequently scrapped due to financial costs. Spectrum still holds hope to find a buyer, and if they should, it would mean that the city has finally recovered from the recession that hit it so hard.