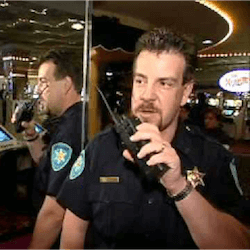 The tragic mass shooting that occurred Sunday evening has left Americans with more questions than answers. The last few days have been a time of introspection for many but angry families and public officials have started looking for the cause of such a senseless act or at the very least, who to blame.

The first question on many lips has been how the shooter, 64 year old Stephen Paddock, managed to get a small armoury’s worth of weapons stockpiled in his room at the Mandalay Bay hotel. Paddock used multiple M-16 rifles to indiscriminately murder 59 people and injured more than 500 others.

People are now looking at how casino security failed to prevent his act. In general, the Las Vegas casinos work together to combat organised crime, money laundering and of course casino cheats. The casinos share a network of information that helps keep their assets as well as players safe. Their network however is not exactly primed to deal with acts of domestic terror such as this.

Experts say that many casinos would not be willing to comply with more stringent security measures such as metal detectors as these pose an inconvenience for high rollers. Professional gambler, R.J Cipriani has come out to say that he is well aware of the bending of the rules for high rollers.

The veteran player claims that shooter Stephen Paddock was ranked as a VIP high roller at the Mandalay Bay casino where he was seen as a $25 000 player, meaning he stands to either lose or win that amount in a single session at the casino. He also had $50 000 worth of credit available at least two major Vegas casinos.

Clearly this was how Paddock managed to use his hotel room as his personal weapon cache and now people are calling for en entire revaluation of casino security. Cipriani along with casino legend Steve Wynn, owner of Wynn Resorts, a rival to MGM who owns Mandalay Bay, stated just last year that Vegas was a huge target for terrorist attacks due in part to the city’s gaming industry, the iconic status the city enjoys and the lax security measures that are in place for dealing with an act of terrorism.

Wynn went on to elaborate on the security measure they have in place at his casinos and how they could have prevented the shooting. He cites the use of metal detectors, plain clothed security and other building features to help prevent the smuggling of weapons into a building. Many security experts note however that it still does not address the bending of the rules for high rollers.