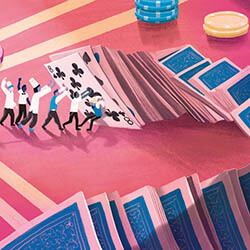 This country’s strange tax laws have once again come into the spotlight. A Canadian Federal Court of Appeals judge recently decided that tips cannot be categorised as gifts, which would have exempt them from tax. They are, rather, income that needs to be tithed just like other earnings are.

Things started when a Grand Villa Casino British Columbia slot attendant, Cheng Xia, disagreed with the Canadian Revenue Agency’s decision that he’d not recorded his income fully in 2011 and 2012. He’d reported on his base salary alone, and the total in 2012 was CA$29 327, not including the CA$39 219 he’d earned in tips. He asserted that this was not income but lost his case in 2018 and his appeal has now also failed.

The government does not tax winnings because it says they’re not a consistent form of remuneration, and while tips seem to fit this bill, the judge’s ruling stands.

But Xia’s case was doomed, despite how illogical the laws seem to be. The Federal Income Tax, unfortunately, sees salary including base compensation and other types of wages including gratuities. The FCA decided that Diane Campbell, the previous court judge, was accurate when she deemed that, while winnings were not taxable, those handed over to a casino employee in thanks or appreciation of services were. She said that the process of paying it over changes its taxable properties.

This means that Xia is now going to have to pay a fine of CA$8 411 for what the court deems as gross negligence because he failed to report in full in the first place.