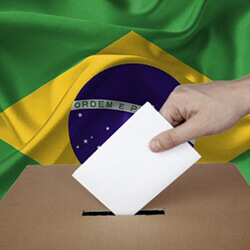 The general elections for Brazil are on the horizon, but not everyone is so thrilled to have new leaders at the helm. Gambling at land-based casinos has been illegal since 1946, and a reform movement to legalise both land-based and online casinos has been in the works since as early as 2014.

The reformation of gambling laws looked promising, but that has changed in light of the upcoming general elections that could potentially see the end to the reforms. The bill has not made much headway in the last few years, and while it was rejected by the Constitiuion and Justice Commission, it still has a chance to go through by vote of the Senate Plenary.

Many casino operators see Brazil as an untapped market, with over 200 million Brazilians using smart phones. The push to legalise online gambling in the country has been pushed by operators for decades, but making progress is difficult.

The only gambling that runs legally in the country right now is the lottery, horse racing, and land-based poker tournaments. The opposition comes in the form of a deep Catholic presence in the country, and as the general elections wind up, politicians seem to have their attention focused on other parts of the country and its people.

Another blow to gambling reform came in 2016 when then president Dilma Rousseff was impeached due to corruption charges. Just a year later, President Michel Temor was accused of accepting bribes. This leaves the current gambling situation in a grey area.