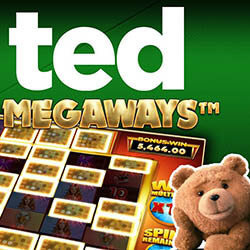 Good news for fans of movie-branded slots is that Blueprint Gaming has just infused its 2012 version of ‘Ted’ with Big Time Gaming’s Megaways magic. Not only that, but the game’s features have gotten a good old spit-and-polish treatment too. The end-result is a game very much reminiscent of the original hit classic, but with a 180-turnaround as far as actual slots action goes.

Now highly volatile, the new and improved Ted Megaways, though much more volatile, comes with the added bonus of offering to players the opportunity win up to 50,000x their bets. The RTP does however save the day at a not-too-shabby 96.03%. And then of course there are all the usual suspects again included too – Wilds, Free Spins, Scatters, Cascading Reels, Multipliers, and more. Allowable wagers start out at 0.10 cents for a spin of the reels and go all the way up to a maximum of $10.00.

Whenever winning combinations are formed, Ted Megaways triggers the Cascading Reels feature. Old symbols already paid are instantly replaced by new symbols, creating even more opportunities to win. The adorable and cheeky Ted is the Wild symbol and will only ever appear on the topmost horizontal reel.

Ted Megaways features a superbly enjoyable Thunder Buddies Bonus Game. Four or more Scatters make the Thunder Buddies magic happen and it’s then up to the player to choose between 12 free games and a Thunder Wheel that will rely on the luck of the draw to determine the number of free games won.