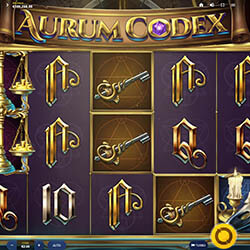 Granted, Red Tiger Gaming, if anything, never fails to “keep it fresh”. The studio recently released teaser details about its August-upcoming new Aurum Codex slot, and the game is judging by initial impressions, headed straight for the casino history books.

Inspired by the legendary alchemists of the Middle Ages, Aurum Codex features what must be one of the most interesting themes we’ve encountered so far this year. And since the slot creates a strong sense of magic, wizardry and symbolic philosophy, the game is sure to appeal to a diverging array of players as far as theme and visual entertainment value are concerned.

But since we don’t game purely for visual stimulation, Red Tiger Gaming has once again done what it seems to do best, which is to include a variety of special features.

The first of these are called Alchemy Wilds. These don’t only act as substituting wilds, but furthermore also become locked into position whenever they land anywhere on the game’s reels. Once landed, Alchemy Wilds will remain locked for one more additional spin. That’s double value for your wild-landing money.

But the slot is also home to a second variety of wild symbol. Golden Wild symbols are created whenever Alchemy Wilds are landed on the 1st as well as the 5th reel during a single spin. This will instantly cause the symbols landed on the same row, from reels 2 to 4, to be turned into magical Golden Wild symbols. Not only do Golden Wilds act as substitutes, but they also pay out at 15x the original bet.