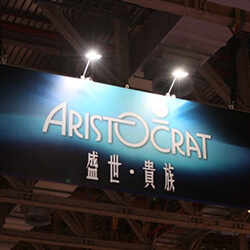 Aristocrat Leisure has recently released their financial report for the first quarter of 2019 which chows that they saw revenue increases of AU$1.9 billion which is a 21% increase as compared to last year at constant currency for the end of the financial year. EBITDA was at AU$708.2 million for the first half of 2019, which was an increase of 10% at constant currency, and they reported profit after tax at AU$318.9 million, which is growth of 24%.

Their fully diluted earnings per share sat at 41.6c for the period, which was up 6%. The operator had made most of its revenue from the Americas sector, with this region bringing in a total of A$957 million for reported currency, which was normalised for significant items, up 28%. Australia and New Zealand were next, generating currency revenue of AU$230.6 million, an increase of 7%.

The digital sector perhaps saw the largest growth of all of their markets, which the operator reporting a currency revenue of AU$820.9 million, an increase of 49% in total. Operational highlights for the company included a number of improvements to their operations, such as increasing their share in land based North American Gaming Operations, which had boosted their daily active users online to a massive 8 million, along with growing their land based sales segment, which has seen significant growth over the year so far, along with their digital sales, which includes supplying of games and services to other platforms.